Declaring War on the Unborn

Posted by James P. McGarvey , 09 September 2013 · 1200 views
Syrian President (dictator) Bashar Assad allegedly ordered a chemical weapon attack on fellow Syrians killing 1,400 people and President Obama, GOP Senator John McCain, Speaker of the House, GOP Congressman John Boehner, and other Congressional leaders are advocating military strikes in response. An attack upon Syria's military assets is necessary, says the President, because the gas attack is a violation of the "international norm" banning the use of weapons of mass destruction (WMD).
President Obama's spokesmen and his mainstream media allies spent Sunday making a full court press to turn public opinion in favor of the military strike by flooding the news outlets with videos of some of the children injured and killed in the WMD attack.

Am I missing something here? In no way do I want to minimize the horror and tragedy the victims of the Syrian gas attack experienced no matter who was responsible, but what about the other 100,000 killed by conventional weapons over the last two and a half years in the same civil war - many of them civilians, adults and children injured, maimed and killed - blown apart by artillery shells - the missiles, automatic weapon fire, car bombs, suicide bombers, executions, beheadings, improvised explosive devices, and other brutal acts of violence?

Why the sudden cries of outrage in the deaths of Syrian children when President Obama, Secretary of State John Kerry, Senate Majority Leader, Harry Reid (D), House Minority Leader Nancy Pelosi (D) and a host of other politicians supporting military intervention, are all staunch advocates of a mother's right to kill her unborn child? For years they have defended it, promoted it, funded it - over 3,300 a day in the U.S. And President Obama and former Secretary of State Hillary Clinton have been avid exporters of abortion rights internationally.

Is this moral leadership? Is using videos/photos of dead children in Syria as a tool to gain public approval for military intervention, demonstrate moral clarity when at the same time you support and condone the killing of over one million unborn children a year in your own nation, over 50 million since abortion was legalized 1973?

If you want to see what abortion does to an unborn child, visit www.abort73.com. You can see videos and photos of the violent and barbaric methods - that rival in brutality any "weapons of mass destruction" - used to kill an unborn child in American state sanctioned abortion. Viewer discretion is advised. The images are graphic.

As abort73.com points out,

Apparently President Obama and his allies advocating military strikes against Syria understand that only too well.

Jeff Bridges once said, "If another nation was doing this [abortion] to our children, we would be at war."

The painful irony is that President Obama has come as close as anyone can to declaring war on the unborn. 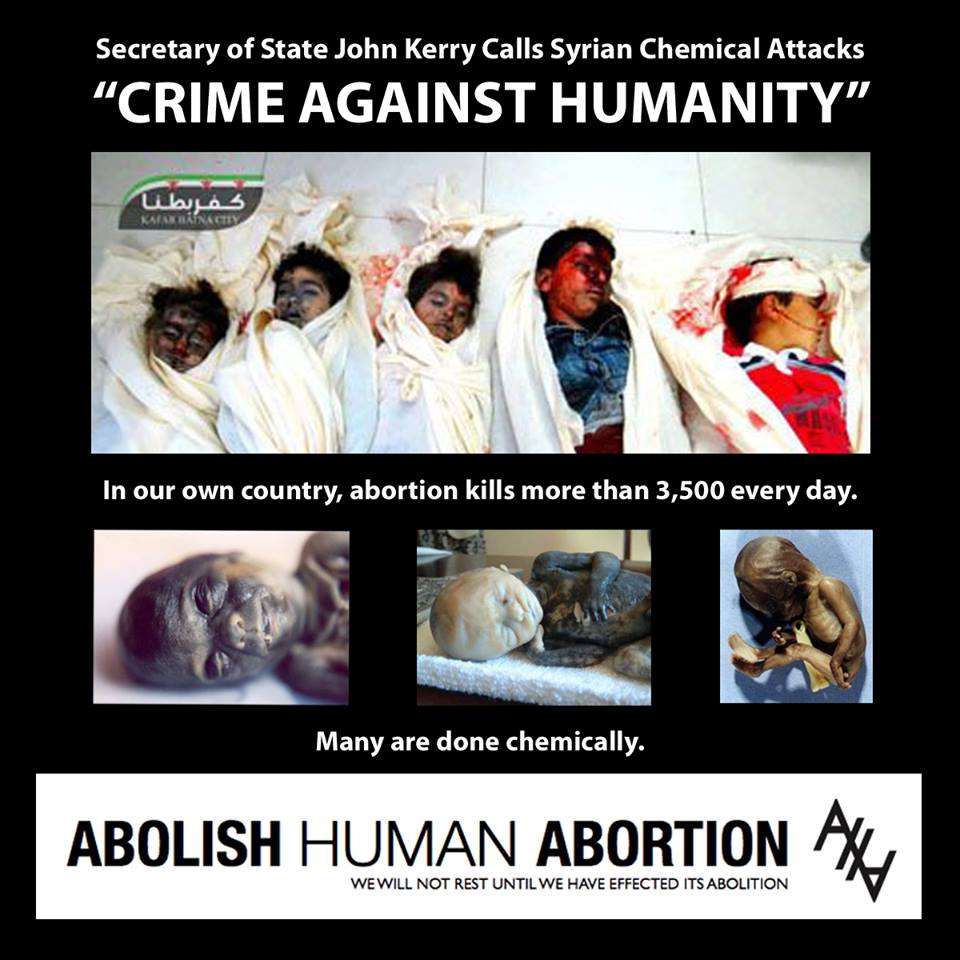