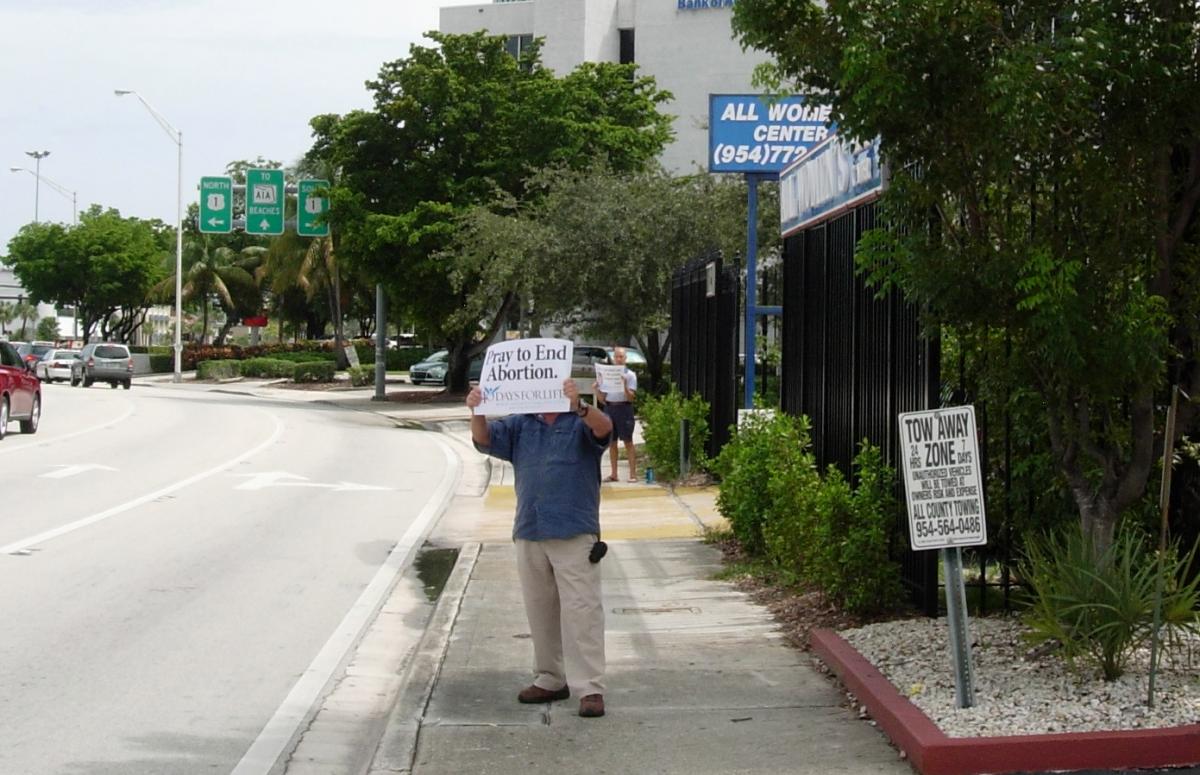 Today was day 7 of 40 Days for Life Fort Lauderdale. Based on statistics provided by the Florida Agency For Health Care Administration, 6,480 unborn children lost their lives to abortion in Broward County in the first six months of 2012.


That translates to the loss of 243 unborn babies in Broward County since the 40 Days for Life campaign began seven days ago and 243 mothers and fathers that will live the rest of their lives bearing the guilt, shame, sorrow, regrets, and any number of other emotional, psychological and spiritual problems traced back to the decision to kill their own young.

When you stand in front of these "death houses" praying and watching the clients coming and going, it puts a "face" on the statistics.

Today, again, I prayed alone for almost an hour until the two other volunteers (pictured) came to pray around noon. The first client I saw was a young woman - perhaps college age - who exited the clinic and walked to a car parked next door where an older woman (her mother?) was waiting. The face of the young woman was conflicted. I saw at least three other women, two accompanied by men, enter the clinic during my vigil.

In speaking to someone about the prospects of his pastor supporting the 40 Days for Life campaign, I was told his pastor would not deal with abortion because it was too "political."

While acknowledging there is a political side to abortion, since it was legalized by U. S. Supreme Court in 1973, and a political fight to be fought, I wish pastors using that excuse to sidestep the issue, would stand in front of a clinic for an hour and look into the eyes of those who become the victims of this "political" issue. Perhaps then their pastoral (shepherding) instinct would kick in as they witness the human tragedy that is endemic to abortion.

Taking the liberty to speak plainly here, I can't think of any "issue" that is more spiritual than abortion. The transforming power of the gospel is what will end abortion and if pastors don't get it, we have a problem. The delay and difficulty pastors and the Church have had in coming to terms with abortion for the last 40 years, is the reason abortion is still alive and well, continuing to take the lives of over 3,300 unborn children every day in the USA.

We believe through prayer and fasting we can access God's power to end abortion. Can you imagine how God would respond to the church lining the street, in humility, compassion and faith, fasting and praying for the end of abortion, the salvation of abortion providers and forgiveness, healing and restoration of those who have been touched by an abortion?

Jesus exposes the devil's role in abortion, contrasting it with his mission,

"The thief comes only to steal, kill and destroy; I have come that they may have life, and have it to the full." (John 10:10 NIV)

And the words of John declare the ultimate outcome,

"The one who does what is sinful is of the devil, because the devil has been sinning from the beginning. The reason the Son of God appeared was to destroy the devil's work." 1 John 3:8 (NIV)

No mention of politics, only a spiritual battle with sin and the devil, a battle that
has been won through the gospel,

"...having disarmed the powers and authorities, he made a public spectacle of them, triumphing over them by the cross."
(Colossians 2:15 NIV)

You can go to http://www.40daysfor.../fortlauderdale to register and sign up to join the prayer vigil. Put prayer before politics and see what God does.

(You can find information regarding 40 Days for Life campaigns in over 300 other cities by going to www.40daysforlife.com)