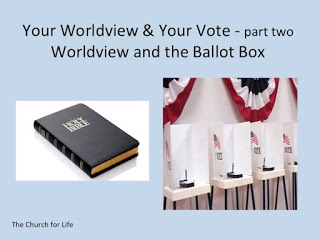 (This is the second part of a message entitled "Your Worldview and Your Vote" that I preached at Pines Baptist Church in Pembroke Pines Florida on November 4, 2012.)

Now to the question, "How then should we vote?" In other words, how do we determine who and what to vote for?

"The only thing worse than not voting, is voting for the wrong candidate."

Perhaps you have seen this ad that was recently placed in newspapers across the country, astatement by Dr. Billy Graham, perhaps the most well known evangelist and Southern Baptist in America, if not the world. He wrote,

“On Nov. 6, the day before my 94th birthday our nation will hold one of the most critical elections in my lifetime. We are at a crossroads and there are profound moral issues at stake. I strongly urge you to vote for candidates who support the biblical definition of marriage between a man and a woman, protect the sanctity of life and defend our religious freedoms. The Bible speaks clearly on these crucial issues. Please join me in praying for America, that we will turn our hearts back to God."

Dr. Graham's words, urge us to vote for candidates who support a biblical position on three critical moral issues, the biblical definition of marriage, the sanctity of human life, and religious freedom.

The fact that Dr. Graham feels compelled to even raise these issues in the context of a general election, is indicative of the fact that there is a battle of conflicting worldviews raging in our culture. Therefore, as Christians, we would be unwise to shrug off these differences as mere political disagreements and miss the spiritual context of this struggle.

Note with me (secondly) the relationship of worldview and the ballot box.

Dr. Del Tackett, - in an article "What's a Christian Worldview?" on Focus on the Family's website, writes,

“A worldview is the framework from which we view reality and make sense of life and the world." He then goes on to quote David Noebel, author of Understanding the Times.

A worldview is "...any ideology, philosophy, theology, movement or religion that provides an overarching approach to understanding God, the world and man's relations to God and the world,'’'

"For example, a 2-year-old believes he's the center of his world, a secular humanist believes that the material world is all that exists, and a Buddhist believes he can be liberated from suffering by self-purification.”

Just a few weeks ago, (Sept 8,9, 2012) Pastor Rick Warren in a sermon entitled, "Standing Courageously for the Truth" said, your worldview,

"If you for instance in your world view believed the world was going to end next week, you would act very, very differently than you are right now. It’s how you decide what you decide. Your worldview influences every choice you make. All your choices are based on it."
Pastor Warren helps us see, how central our worldview is in every decision we make in every area of life. And I would suggest to you this morning, that it plays a vital role as we carry out our civic responsibility in the voting booth. As we elect candidates who are responsible for determining public policy that affects each of us our children and grandchildren and the entire nation.

But, take a step back with me for a moment. I hope you realize how important it is that you and I have a biblically informed worldview as we go through that process of deciding who to vote for, or what to vote for.

"Although most people own a Bible and know some of its content, our research found that most Americans have little idea how to integrate core biblical principles to form a unified and meaningful response to the challenges and opportunities of life."

Perhaps this explains the troubling condition we find our nation in today. Or why, Dr. Graham said, "We are at a crossroads...."

Listen to what Pastor Carl Gallups said in a recent interview with WND the online news network,

"About 60 years ago, our culture decided it didn't need God or the mention of His Word anymore. So, we have raised several generations of children to believe that they are the 'me' generation. They were taught that there is no God, there is no higher authority,' there are no moral absolutes, and that they are nothing more than a cosmic happenstance based upon sheer random luck." Listen to what he goes on to say about the relationship of this secular worldview to the moral decline of our culture,

"With such a worldview thoroughly ingrained within the institutions of our culture we now reap what we have sown.

"The abortion holocaust could not happen without first convincing the nation to believe that we are nothing more than a mere animal.

"The radical homosexual movement could have never risen to its current level without first persuading the nation that there is no standard of right and wrong concerning our sexuality.

"Homosexual marriage would have never been considered until first the nation became convinced that marriage is nothing special or divinely ordained, and that marriage can be defined anyway in which man finds pleasing to his flesh and lust."

All levels of government in America, federal, state and local and the courts - are now involved in promoting, legalizing or defending immorality. Just a few weeks ago I listened to a sermon by Pastor Shane Idleman in California who shared with his congregation that "Governor Jerry Brown [CA] just days before had signed into law a controversial ban on counseling and therapy for youth that is not affirming to same sex attraction." This means you can't counsel young adults and say same sex attraction is wrong.

Just last night I read a report on the internet that a "...45 year-old male student, who dresses as a woman and goes by the name Colleen Francis, undressed and exposed his..." private parts "...on several occasions in the presence of young girls who use the college's locker room....

"Alliance Defending Freedom sent a letter to Washington's Evergreen State College Thursday after college officials claimed that its non-discrimination policy doesn't allow the school to stop a man from exposing himself to girls as young as six years old in a women's locker room. A local district attorney has also stated that he doesn't plan to enforce the state's indecent exposure statute to protect the girls."

As Pastor John MacArthur noted in a sermon just a few weeks ago, "...one of the historic parties here in the United States adopted the sins of Romans 1 as their platform." ("Abortion and the Campaign for Immorality" September 16, 2012)

Dr. Marvin Olasky has pointed out,

“We know that sin cannot be wiped out, because it is within everyone; we just don't want sin to gain governmental backing...We believe that God instituted government for the prosecution of wrong doers and not the promotion of evil.”

His opinion is consistent with the role of government Paul sets forth in Romans 13.

We've already seen that Paul said government was instituted by God and the church is to be subject to it. Look at verses Romans 13:2-4 (ESV),

"2 Therefore whoever resists the authorities resists what God has appointed, and those who resist will incur judgment. 3 For rulers are not a terror to good conduct, but to bad. Would you have no of the one who is in authority? Then do what is good, and you will receive his approval, 4 for he is God's servant for your good. But if you do wrong, be afraid, for he does not bear the sword in vain. For he is the servant of God, an avenger who carries out God's wrath on the wrongdoer."

Remember Paul wrote these words while living in the Roman Empire, not in a nation founded on transcendent truth. He says that the authorities are appointed by God. (verse 2) and as God's servants are to restrain evil, with lethal force if necessary. You see, the depravity of man provides the moral necessity for the institution of government.

A government that protects society from evil and promotes righteousness sets the stage for a free and safe society. Freedom never comes without a price. Freedom prospers and survives only in the context of moral values that transcend the self- centered, nature of sinful man.

I am glad that there are stop signs, traffic lights and speed limits in our county. Otherwise I might not have made it to church alive this morning.

Paul also says that governing authorities give approval, recognition or praise to those who do good. They do this in their role as God's servants, says Paul.

Again, Pastor John MacArthur, "This is not about politics, although there are things we should talk about. You’re not voting for a pastor, you’re not voting for a spiritual leader, you’re voting for someone who has some sense of morality.
Since the Bible says that the role of government is to punish evil doers and protect the good, you better have somebody in power who understands what is good and what is evil. And if you think homosexuality, abortion, sexual freedom, hating God are not evil,
then you better go back and check your Bible again. How can people with that kind of agenda protect those who do good and punish those who do evil? That’s Romans 13’s definition of the role of government. ("Abortion and the Campaign for Immorality")

The fact that these biblical issues have become political issues makes this question even more critical, "How should we vote?"

Please understand at the outset, that I do not for one moment believe that America's moral decline will be solved at the ballot box. Nor do I believe that the proponents of the secular humanist worldview behind these changes are the enemy.

No, they are the victims of the "god of this age" who has "blinded the minds of unbelievers, so that they cannot see the light of the gospel that displays the glory of Christ, who is the image of God." 2 Corinthians 4:4 (ESV)

We must be very careful especially in the public discourse of these issues to bear in mind the attitude and behavior Christ has called us to.

24 And the Lord's servant must not be quarrelsome but kind to everyone, able to teach, patiently enduring evil, 25 correcting his opponents with gentleness. God may perhaps grant them repentance leading to a knowledge of the truth, 26 and they may come to their senses and escape from the snare of the devil, after being captured by him to do his will."

Notice the emphasis on our demeanor: not quarrelsome - don't fight; kind, patient even when enduring evil; gently correcting and able to teach. And notice the condition of our opponents. It's described in graphic spiritual terms. The need for God to grant repentance; leading them to the truth coming to their senses; the idea is, they have been drugged, they have been trapped by the devil, held captive to do his will.

We are in a spiritual battle for the minds and souls of men. First and foremost, therefore, America's hope lies in a spiritual awakening, that needs to begin in the Church, 1 Peter 4:17, "judgment begins in the house of God." America desperately needs the gospel. That ought to be clear from the Barna research. No political party is going to save America.