Your Worldview & Your Vote - Part One - Christian Why Vote? 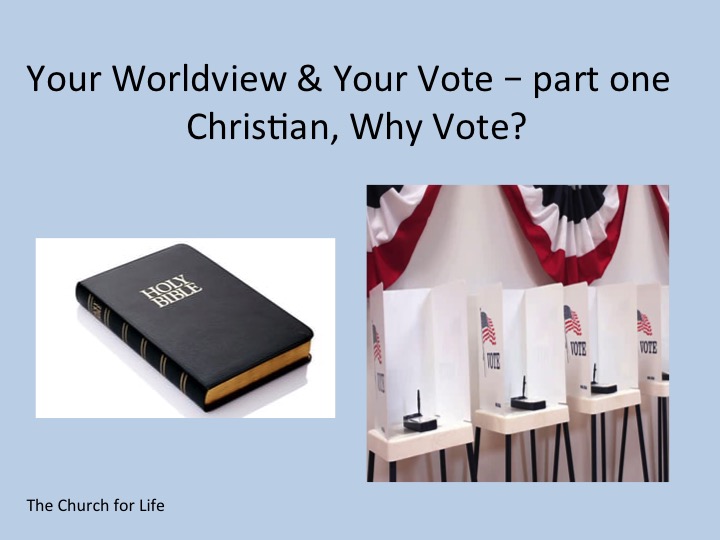 In any general election, of the 60 million Christians in America, only 30 million of them vote. To put that in perspective, in the state of Missouri in the 2008 presidential election, the voting margin between the two main presidential candidates was 3,903 votes, and there were 102,522 unregistered Christian voters in Missouri that did not vote in that election.

In the state of North Carolina in 2008, the voting margin between the two main presidential candidates was 14,177 votes, and there were 281,212 unregistered Christians in North Carolina that did not vote.

You might remember the 2000 presidential election where Governor George W. Bush narrowly defeated Senator Al Gore. That election was decided when Governor Bush won Florida by less than 600 votes, 537 votes out of six million votes cast in Florida.

You have probably already realized that I am assuming if you are a citizen eligible to vote, you should vote. So first of all this morning, let me tell you why we should vote.

Jesus was asked a question by his enemies, as recorded in Luke chapter 20. (vs. 20-26) “Is it right for us” they asked, “to pay taxes to Caesar or not?” Jesus seeing their duplicity took a coin and asked them whose portrait and inscription were on the coin. They said “Caesar's” to which Jesus replied, (Luke 20:25) “Then give to Caesar what is Caesar's, and to God what is God's.”

In the opening verses of Romans 13 the Apostle Paul, writes to the Roman church regarding their responsibility to those in authority over them.

"Let every person be subject to the governing authorities. For there is no authority except from God, and those that exist have been instituted by God." (Romans 13:1 ESV)

According to Paul, the institution of government was God's idea. He instituted it and its authority comes from Him. Therefore the church in Rome was to be subject to the governing authorities.

In America, unlike the days of Jesus or Paul, we don't have a Caesar. So how does Jesus' answer apply to us? What do Paul's instructions say to us, if anything, about the Christian's civic responsibility particularly the issue of voting?

Therefore, in a Republic the citizen not only has the right, but the obligation, to participate in the political process in order for the system to work. This form of government is defined in the founding documents of our nation, the United States Constitution.

In 1778 the Constitution of the United States was ratified. This document gave the citizens of the U.S. the right to vote. Subsequently several amendments extended voting rights to even more citizens as gender, racial and economic barriers to voting were eliminated by amendments to the Constitution.

The Constitution makes provision for the election of the members to the U.S. House of Representatives, the U.S. Senate and the president. Similar documents provide for our participation in elections at every level of government state, county, municipalities, and so forth.

May I suggest to you, therefore, that the U.S. Constitution is our “Caesar.” It is our “Caesar” because, as the governing document of our nation, it defines our responsibilities as citizens of the republic.

And the centerpiece of our governing process is the right and responsibility of each citizens to vote. In our Republic, the vote of the citizen is THE most critical and indispensable part of the political process. And Jesus said, "Give to Caesar what is Caesar's" and Paul said Christians were to be "subject to the governing authorities."

"If the people fail to vote, a government will be developed which is not their government…. The whole system of American Government rests on the ballot box. Unless citizens perform their duties there, such a system of government
is doomed to failure.”

The late Chuck Colson said, "Our first civic duty is to vote. If you don't vote, you are abandoning the biblical obligation to be a responsible citizen."

"Some have been convinced to simply stay at home and leave the ballot blank. Not an option for the true Christian your vote is the currency of your virtue." (Elijah Ministries email 10-17-12 "Election 2012: A Different View")

I think he's right, if you are a citizen, you should vote.