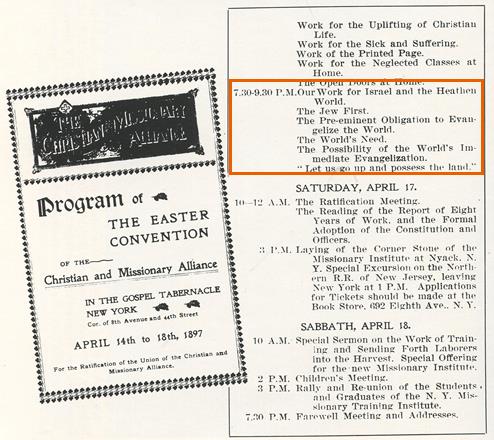 Dr. Albert Benjamin Simpson, the founder of the Christian and Missionary Alliance, never intended to found a denomination. His initial vision was to form a fellowship of Christians who would seek to know Jesus as Savior, sanctifier, Healer and Coming King. Simpson also had a God given vision and burden to reach the unsaved millions around the world. His passion for lost souls is visualized as we see him in prayer with his arms around a globe and his tears falling on a lost world as he lifts up a fallen world to God.

A copy of that program is pictured in the book ALL FOR JESUS found after page 98 on the second page of the pictures. On Friday evening, April 16, 1897 at the 7:30-9:30 p.m. service we find the following words listed in the program that night:

Our Work for Israel and the Heathen World

The Pre-eminent Obligation to Evangelize the World

The Possibility of the World’s Immediate Evangelization

“Let us go up and possess the land.”

Implicit in the formation of The Christian and Missionary Alliance and incorporated in our spiritual DNA are the words “Our work for Israel and the Heathen World. The Jew First.” These are the words of Paul the Apostle found in Romans 1:16 “For I am not ashamed of the Gospel of Christ for it is the power of God to salvation to everyone that believes, to the Jew first and also to the Gentile.” Dr. Simpson not only wrote and spoke these words, he lived them out. The early magazines of the Alliance carried articles on missionary work among the Jewish people and listings of Jewish missionary organizations in virtually every issue. Names like Gabeline, Irish, and Gruen were connected to Jewish outreach.

At the Annual meeting of The Christian and Missionary Alliance in Boone, IA on May 26-30, 1912 we find the following in the annual report of 1911-1912 under the heading “Special Fields.” Dr. Simpson’s introduction of reports from the mission field begin: “Turning now to a review of particular fields our attention is naturally called in the divine order, first to Palestine.” A report then follows of both work among the Jewish people and the Arabs. Only after this report, the other mission fields follow, on pages 13-15. A further report is given later in that Annual meeting by the Committee On Jewish Work:
“The Committee submits the following:This resolution is offered—

In his book series Christ in the Bible, book on “Genesis” Dr. Simpson spends a chapter on “Beginning of the Hebrew Race” chapter 7 p. 101-11. He refers to Abraham who became the “head of a separate people, chosen out of all the families of men, to be the special depositories of divine truth and the witnesses for God and the true religion throughout the coming ages; and also to form a clear genealogical line for the advent of the promised Seed”, page 101. Simpson cites “The Call of Abraham” and quotes the seven unconditional promises to Abraham and his descendants. “Now the LORD said to Abram, "Go forth from your country, And from your relatives And from your father's house, To the land which I will show you; And I will make you a great nation, And I will bless you, And make your name great ; And so you shall be a blessing ; And I will bless those who bless you, And the one who curses you I will curse. And in you all the families of the earth will be blessed." Genesis 12:1-3.

Israel was to be a separate people and dedicated to God and His ways. The land of Canaan was promised as an everlasting possession of the Jewish people.
God chose Israel for three major roles:
Again Simpson writes “To them also we owe the divine law…and, indeed all we know of the true and living God.”, page 105 (Christ in the Bible: Genesis) He also says, “Let us never forget, as we look upon the Jew, that he is the brother of Jesus of Nazareth, and has given to us our precious Savior and dearest Friend.”, page 105. Dr. Simpson goes on to say, “They are distributed in almost every nation under heaven, as an evident part of the divine plan in their future destiny… Should they be converted to Christianity, there is no instrumentality on earth that could so suddenly and effectually be made available for the evangelization of the entire world.”, page 110.

Simpson: The Obligation to reach Gods Chosen people. “Preeminent above all other ministries for the evangelization of the heathen world is the Great Commission. The command, “Go ye into all the world, and preach the gospel to every creature” (Mark 16:15), requires a personal ministry from man to man and for every man. The command to begin at Jerusalem passes on to us the obligation to reach God's chosen people. Acts 1:8 “Go ye…and disciple all nations” raises our commission to a nobler plane and makes us ambassadors for the King of kings and trustees of the gospel for every kindred and tribe and tongue. The command, “Ye shall be witnesses unto me both in Jerusalem, and in all Judea, and in Samaria, and unto the uttermost part of the earth” (Acts 1:8), lifts the outlook beyond any section of humanity, any circle of selfish patriotism and any form of religious selfishness. It makes the work of evangelization the one supreme ministry of the Church of Christ and the one paramount responsibility of every disciple of the Lord Jesus Christ. Have you come into close touch with the risen Christ or caught the spirit of His last momentous days on earth? If so, you cannot be inactive, indifferent, or even neutral in this mighty enterprise which is the emergency work of our times and which is the one great business for which God has called us. “As my Father hath sent me, even so send I you.” John 20:21”

Dr. Albert Benjamin Simpson, the founder of the Christian and Missionary Alliance, never intended to found a denomination. His initial vision was to form a fellowship of Christians who would seek to know Jesus as Savior, sanctifier, Healer and Coming King.

I find that in my own walk with Christ that my life has by in large been a "nondenominational walk in Christ." It's how I was led thus far. The very word "denomination" has always, until I discovered the Alliance, been a negative to me.

The Lord was sharing with me a perception the other day that there will indeed be no denominations in heaven. There will be no Baptist, no Lutherans, etc. there will only be the sons and daughters of God. When we are going to fly we check our baggage at the ticket counter and are allowed to only take one carry on. As I was considering this it occured to me that when the Lord does come for us, we must check all of the "baggage" at the counter and only carry into heaven the only allowed carry on being, "I'm a child of God"

So it interest me greatly to discover your post and the understanding that Dr. Albert Benjamin Simpson, the founder of the Christian and Missionary Alliance, never intended to found a denomination. That resonates with me and indeed I have come to see The Christian and Missionary Alliance as "the reluctant denomination" because it is not the spirit of the CMA to be divided, but it is fully understandable that at a certain point in history it became essential to distinguish the CMA's beliefs, doctrinal positions and positions so as to not be confused with some perceived errant beleifs that were prevelant in that day and even now. I respect that. I'm just leaning about the Alliance history and current global ministry works so personally as a newcomer I am perceiving The Alliance as "the reluctant denomination." I hope that doesn't offend anyone but it encourages me to see the roots of the matter and when I say, "the reluctant denomination" I mean that my understanding is that they reluctantly became a denomination for understandable reasons but its not an issue of pride or divisiveness, but rather it lends to purpose alliances to farther the preaching of the Good News. I like that. I also like reaching Israel with the Messianic message of their and our Messiah Yeshua Ha'Maschiach. Great article.