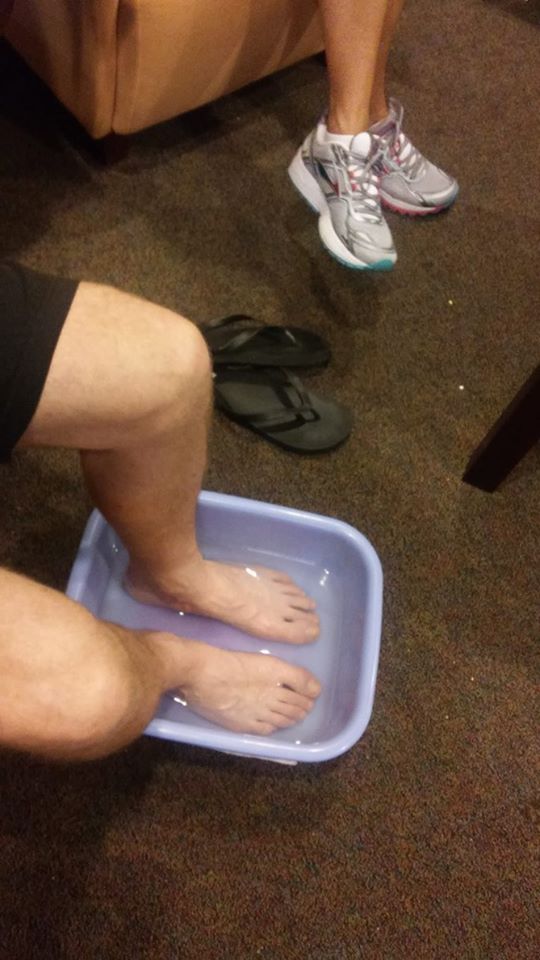 From August 11-19 our team trained for two days and witnessing for five in New York City for the "Awake O Israel NYC Witnessing Campaign to the Jewish People." From the preparation to the beginning of campaign, we were keenly aware that a spiritual battle was happening. Our team members have been attacked by the enemy through illness, theft, vandalism and more. One of the team members had his car vandalized preventing him from picking up our U-Haul at the proper time. He needed to find a replacement, fast. This put our departure time from Philadelphia about 5+ hours behind schedule - the truck had to be loaded and then driven in rush hour traffic to NYC. Our team members were arriving, and did not have someone from our team to help them navigate the city with trains, subways and cabs.

The team was tired from travel and our first day of intense training. The elevator wasn’t working right, but as the elevator repair person came in to fix it, Abe told him we would pray for him, and ask God to help him get to the root of the problem. A big cheer arose when he reported to us it was repaired, and Abe, then, asked the man, "What do you think about Jesus?" His reply. "He saved my life and is the most important person in my life" was the answer - Elevator Man was a believer!

At the end of the first day on the streets the team was wiped out. Heat really takes a toll on them and keeping hydrated is a big job. But the team was focused, well trained and resting up for the next day.

We used several methods of reaching people: passing out tracts, setting up a table in a populated area with signs, and also adding the element of worship with songs and instrumental music. At times all three are going on at together. The team is out 3 times daily 2 ˝ hours at a time.

Brian had an opportunity to dance and sing “Hineh Ma Tov” with some Israeli Jewish men, who received tracts, information about Jewish prophecy and engaged in conversation with him.

Roger reports: “Today I met a 20 something year old young man whose original county is Algeria. He said he was Muslim and his wife is a Christian. I said “your wife has been praying for you.” He agreed. After some conversation and looking up some scripture he prayed the sinner’s prayer.”

One of our team members was pushed hard by a homeless person, who thought his panhandling was being affected by our presence. We’ve had someone spit ‘at’ the shoes of a team member, and another experienced a tract being ripped up in front of their face.

Some of our team was in the Diamond District and one of the team members met a 20-something Jewish woman who gladly received our broadside and was open to hear what we had to say. A guard near a store asked to see our material and said he had to share it with someone in the store.

Jamil from Guatemala asked for our literature and said that he had asked God to help him find someone who could lead him to the Lord, a church and baptism. He was very burdened by his sins, and then was led by a team member to settle the matter, and became a believer!

A Jewish man took one of our “Can You Be Jewish and Believe in Jesus?” broadsides. He asked our team member, “Don't you become a Christian if you believe in Jesus?” Our team member said, “You were born Jewish and that doesn't change when you believe Jesus is the Jewish Messiah. Jesus is Jewish, and it is the most Jewish thing you can do, to believe in Him.” He responded with a drawn out, “ooooohhhh” and walked away reading the tract.

The team is genuinely sad to see this week completed. Although they want to go home to see their family and friends, they see the need is so great here in NYC, with the largest concentration of Jewish people in the US, right here. Their hearts have been changed, they see the need, and they have deep understanding that to share the Gospel means to include the Jewish people. Team members want to continue to share the Gospel in their home areas, and a few of them are considering following the model that we used here [in a smaller scale] or the model in Seattle with a booth ministry. Either way or some way different, they will be sharing the Gospel more intentionally. They have been amazingly equipped by the Holy Spirit, and through their training and experiences and they have a deeper understanding of “not willing that any should perish.”
Stats:
7185 Tracts distributed
4 Unsaved Jewish contacts
5 Jewish Believer contacts
6 unsaved Gentile contacts
20 Gentile Believer contacts
1 Jewish decision to follow Jesus
3 Gentile decisions to follow Jesus
2 Jewish Believers that have Jewish friends they want to reach and asked for assistance
4 Gentile Believers that have Jewish friends they want to reach and asked for assistance

DO YOU WANT TO JOINT THE TEAM NEXT YEAR? Write to us for more information. We will train you to reach Jews and Gentiles in your daily life as well as provide training for on-the-street witnessing opportunities.

Do you have Jewish family or friends that we can help you reach with the Gospel? We have resources, as well as opportunities for speaking engagements, training programs (JETS - Jewish Evangelism Training Seminars) and more. Contact me for availability!

I was there with you and I encourage young people to get involved. The Lord is very much in this; it is time to bring God's chosen people into the presence of their
Messiah Yeshua/Jesus.

This is why we need them, as the word states...

We need your youth, we need your strength, we need your endurance and most of all your absolute commitment to
Jesus Christ and the great commission to go into all the world and preach the gospel, first to the Jews and then to the gentile (Romans 1:16).

Thanks so much for letting me participate.