Love Letters
God talks to me through His Word

That evening his disciples went down to the shore to wait for him. But as darkness fell and Jesus still hadn't come back, they got into the boat and headed out across the lake toward Capernaum. Soon a gale swept down upon them as they rowed, and the sea grew very rough. They were three or four miles out when suddenly they saw Jesus walking on the water toward the boat. They were terrified, but he called out to them, "I am here! Don't be afraid." Then they were eager to let him in, and immediately the boat arrived at their destination!

The next morning, back across the lake, crowds began gathering on the shore, waiting to see Jesus. For they knew that he and his disciples had come over together and that the disciples had gone off in their boat, leaving him behind. Several boats from Tiberias landed near the place where the Lord had blessed the bread and the people had eaten. When the crowd saw that Jesus wasn't there, nor his disciples, they got into the boats and went across to Capernaum to look for him.
(John 6:16-24 NLT)

This passage presents the 5th sign: Walking on water. And it occurs before Jesus explains the multiplication of the bread!

In verse 15 after the feeding of the crowd, Jesus had withdrawn from them because he knew they wanted to make him their king. He had gone to a mountain alone. He had gone as he did many times to pray to his Father. What a lesson for us. Get alone and with Father! Too busy. Part of the times, end times, I believe.

16-17 Evening came and the disciples went down to the lake.

They probably wanted to get back to home, Capernaum during daylight. That area around the lake is very hilly, so the disciples actually did go DOWN to the lake. 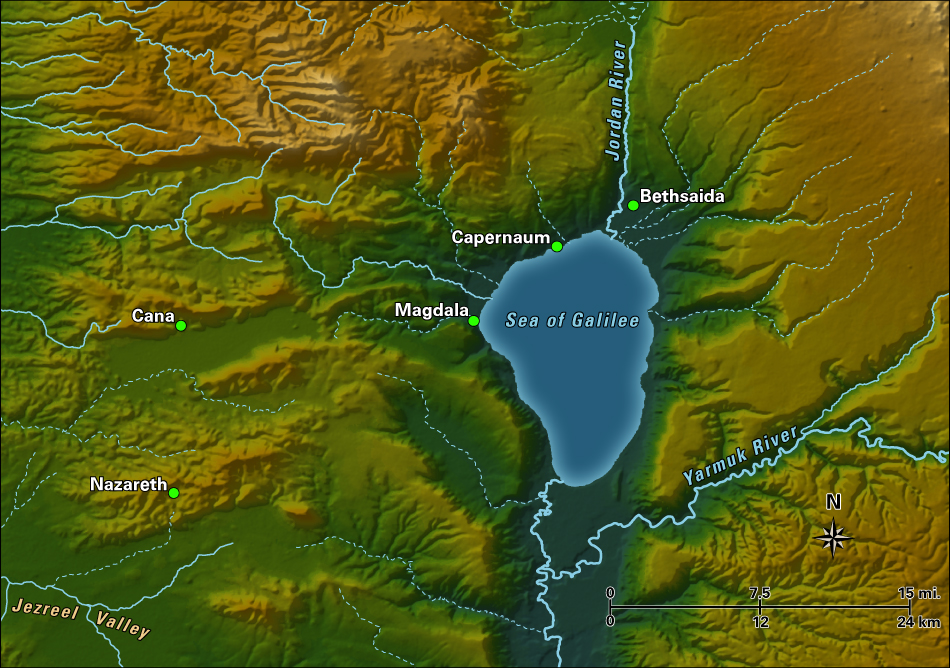 They had been near Bethsaida where the multiplication of the bread and fish was done.
The trip to Bethsaida wasn't very far but it was inland a bit where Capernaum was right on the lake.

Dark had begun before they started in the boat to cross the lake.

They may have held back and waited for Jesus. This might be why it was nearly dark when they left. Jesus did not join the disciples when they got in the boat and set off rowing across the lake to home. He had been left behind.

The Sea of Galilee is a depression between the many hills and it's 600 feet below sea level, the lowest freshwater lake on earth after the Dead Sea, a salt water lake.
The sea is about 13 miles long and 8 miles wide.

It was spring time. The cooler air comes down the hillside from the west and roughens the sea and the wind.

It's a good picture of the church. There are people in that boat doing their work, rowing seemingly is not getting them to shore. It's dark. But the Lord is there, walking on the storm, on the rough sea.

They had rowed a distance from the shore (3 1/2 miles) and were horrified to see a human figure coming toward them on the water. Mark 6:49 said they thought he was a ghost and were terrified. The disciples seem more afraid of the Lord Jesus than they are of the storm! But the disciples have never been out of the view of the Lord, even though they could not see him!

Remember God saving Israel through the sea, making a way for them through the sea as they fled the Egyptians?
Psalm 77:16
Psalm 77:19
Psalm 107:29
John 8:24
I am : For the Jewish people the most holy name of God is Yahweh, which may be translated 'I am'. In the Gospel of John 'I am' is sometimes used by Jesus to show that he is that one.
(NO founder of any of the world's religions claimed to be God other than Jesus.)
Apologetics Bible comments on John 6:14-15

In the Old Testament, Moses, Joshua, Elijah and Elisha all parted bodies of water, but only God trod upon the water (Job 9:8; cf. Ps 77:20).
"He alone has spread out the heavens and marches on the waves of the sea."
(Job 9:8 NLT)

20-21 It wasn't until Jesus calmed them by telling them it was him that they took him onto the boat.

As the multiplication of the bread showed Jesus' power of matter, this miracle showed the disciples Jesus' power of nature and his ability to be with them no matter what. (They left him!) One more lesson in the education of his disciples' faith.

The people realized something had happened. They knew Jesus had not joined his disciples when they boarded the boat but he was gone as well as the disciples were. So they went in search of Jesus to his home, Capernaum.